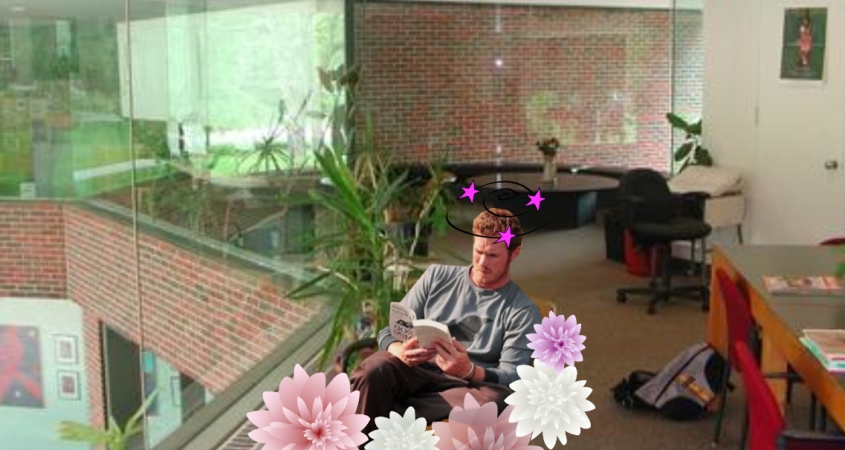 Bearded sophomore Leo Whiteman was seen yesterday reading a copy of James Joyce’s Finnegan’s Wake in the middle of the VAC Art Library, reportedly for pleasure.

“It’s a pretty tough read, which is probably why it’s not on the syllabus of any offered courses at Bowdoin,” Whiteman said to the room in general, unprompted. “I decided to add it to my personal reading list that I keep on the inside cover of my pocket-sized black Moleskin notebook, and the rest is history.”

Whiteman, who located himself centrally in the second-floor arts library, says that he often reads such difficult seminal works “purely for pleasure.” He said his literary prowess increased after attaining his non-prescription Warby Parker glasses from a free trial offered in one of his favorite podcasts.

“There’s nothing better than sitting with a nice, long book surrounded by like-minded intellectuals who can see you reading it,” Whiteman continued, his bare feet slipping in and out of his Birkenstocks with his glasses perched low on the bridge of his nose.

When the VAC is too crowded, Whiteman listed the Café sofas and Brunswick’s Little Dog Coffee Shop as his favorite alternate locations. He added that he “takes his coffee black,” but that it’s “not a big deal or anything.”

Whiteman’s fellow Reed House members noted that he is a “complete fucking asshole,” and that “they’re working on it.”