This past Friday, pop artist Quinn XCII held a stunning performance at Smith Union, to much critical acclaim. Some of his absolute bangers included, “Bach’s Quinntet in F Major, Op. 22, No. 2,” and 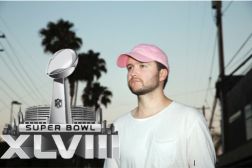 “IamaQuinntuplet.” One self-proclaimed male “athlete-student” described the show as “out-fucking-standing bro, the music was bumping and it really got me in a mood to hit on all the freshmen.” A local parent said, “The concert was wicked fun, and he didn’t say any cuss words like that Walker Flocker guy did a couple years ago, so my kids had a blast, too!”

The musical prowess flowing from Quinn’s mouth and orifices was so astounding that the Bowdoin Entertainment Board immediately tried to reschedule him for Ivies. Unfortunately, Quinn will be on tour in Europe during Ivies weekend, so the board settled for his older brother, Super Bowl XXXCII. Super may be a little washed up, but can still throw down some oldie hits like, “Fergalicious” and “Janet’s Tit.”

Sophomore band XX/XX opened the show, announcing they will go on tour with Quinn before they make it big time, for real this time, they promise.