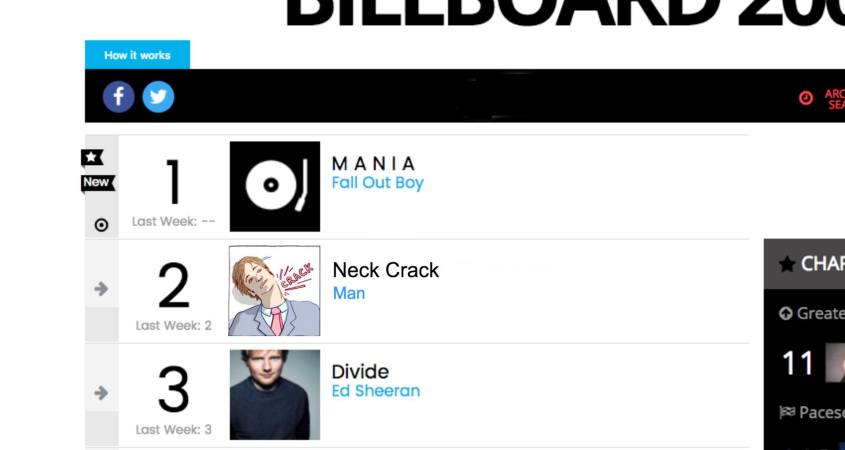 After a week of sleeping on his friend’s futon, area man Reese S. Peanutbuttercup has developed a crick in his neck that has skyrocketed to number two on the Billboard Hot 100 chart. Mr. Peanutbuttercup had been cracking his neck all week during his stay with childhood friend and Grammy Award-winning producer Swizz Beats.

“I was in my recording studio that I have in my house trying to come up with a new beat like we producers do,” Swizz Beats said. “And I was having a terrible case of writer’s block when all of the sudden I heard the most ear-wrenching sound through the walls. I was startled, because as a millionaire producer, I thought I had the studio completely soundproofed. I stepped outside, and I heard the most aggressive crrrraaack sound I’d ever heard. I thought it was like a TR-808 on steroids at first, but then I realized it was just Reese. I said, ‘we got to lay this shit down.’”

The two released the single “Stairway to Heaven 2: Step Ladder Edition” on SoundCloud late Monday morning, and since then the song has taken the entire music world by storm. The song features only the sound of Mr. Peanutbuttercup cracking his neck as well as a touch of reverb. Pitchfork has called the song “revolutionary.” Kanye mentioned in an interview “why didn’t I think of that?” Billy Joel said, “What are you doing in my house?”

Since this song hit the airwaves, hundreds of artists have released copycat songs featuring knuckle cracks, knee slaps, and even the occasional odd throat clear. Camila Cabello’s “Havana” even featured a blood curdling sound of blood curdling, but few songs can top the sheer genius on “Stairway to Heaven 2: Step Ladder Edition.”

“I’m just so amazed,” Mr. Peanutbuttercup said. “You never know when inspiration is going to strike, but thank God I put off going to that chiropractor or else none of this would have ever happened. Isn’t modern pop wonderful?”