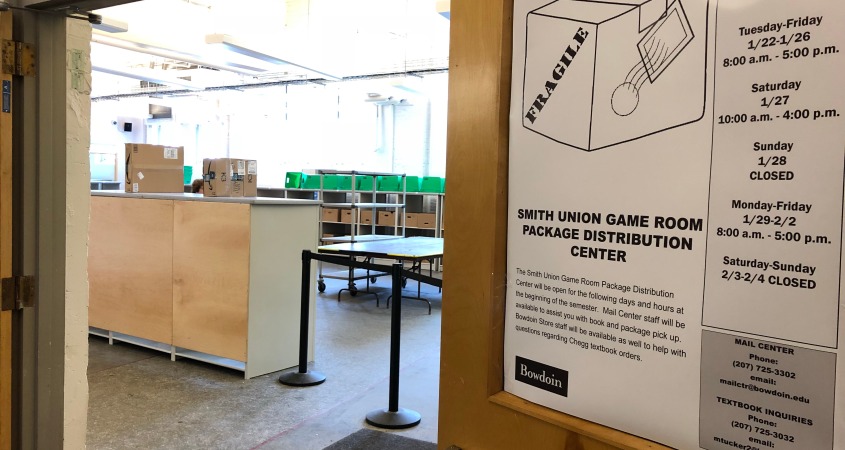 Michael Tucker gave his weekly State of Smith Union address yesterday, with much more sarcasm than usual. Specifically, Tucker brought campus attention to the overwhelmed state of the game-room that is currently a temporary package distribution center. (For reference, this is the room in Smith with ping pong tables, but no paddles, balls, or people.

While the speech included statements on the table tennis game and deadlines, Tucker’s most notable comments revolved around the influx of shipments coming into Smith without proper response from a receiving party. He said that his workers were proud exporters of postcards to the entire Bowdoin Campus and that they were ready to begin trade, but that College students were not respecting his desire for a unified response. He claimed students receive their postcards and respond without any regard for the skill, merit, and safety of his own party.

Tucker spent that last 30 minutes of his 80 minute speech talking about how it was time to come together to rebuild Bowdoin’s crumbling infrastructure before students forget about what made Smith Union great. This of course refers to the ping pong tables within the Union which are currently across the hall and being used more frequently than ever. Tucker did take credit for this.

He concluded the traditional address by stating that the game was on, and that there has never been a better time to start picking up your packages and living the Bowdoin dream. In Tucker’s words, “be a DREAMer and pick up your package now!”

In other news, MY package distributor, Michael Tucker, claims that the blizzard today is clear evidence that climate change is fake news.