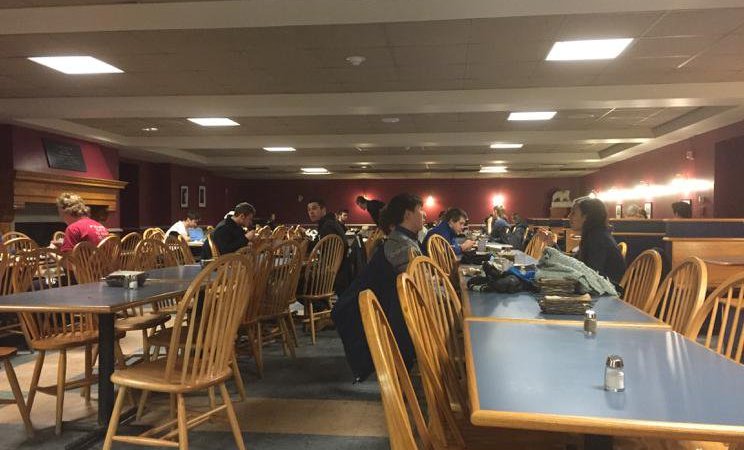 Dining Services announced this morning that the Moulton Union dining hall will begin playing advertisements in lieu of music during meal hours.

Last year, the dining hall pushed the limits of its budget with extravagant meal options like Brunswick-sourced rabbit empanadas and broccoli. In March, the College tried to limit this exorbitant spending by cutting Moulton’s weekly budget in half. In response, the dining hall eliminated all vegetables from its menu and served dry pasta and melted lactose-free soft serve ice cream instead.

To avoid decreasing options, Dining Services director Anna Pedroza announced a new plan to replace the music played in Moulton with local advertisements. “It’s not a decision I want to make,” said Pedroza. “But this will allow us to become independent from College funding and provide our students with the food that they need and love, like key lime-glazed Austrian mink and grass-fed corn tamales.”

Many student employees are ecstatic about the new plan. “Picking music to play for hundreds of people every night is really, really stressful,” said one student employee. “Half of these people want to eat their blueberry muffins to Lil Uzi Vert and the other half want to munch on warm artichoke dip to the Mulan soundtrack.” In fact, the majority of comment cards submitted in Moulton are criticisms of student music tastes, often times scathing and vulgar enough to force students to quit their jobs and drop out of school.

Pedroza is very hopeful about the new initiative. “Plus,” she added, “We won’t have to argue with the College about getting a Spotify Premium membership anymore.”